Skid Row is taking center stage as the Skid Row Housing Trust has been putting in work for the neighborhood, creating and redeveloping to provide housing opportunities for the homeless.  But with Echo Park, Highland Park, and Lincoln Park being the latest areas to undergo gentrification and Mid City (Yes, World on Wheels Mid City) being the current gem in the eye of the developer, is Skid Row next?  Well now that Downtown LA is showing signs as a prominent contender as live, play, work neighborhood Skid Row could be looked at as the working class’s option, offering a cheap alternative to living in DTLA.  Well with that in mind, the $20.5 million Star Apartments is rising atop a one-story existing structure at Sixth and Maple streets. But unlike other construction sites in Downtown, no hammer-wielding, workers erecting, or wood frames necessary. Instead, a crane is lowering prefabricated residences one-by-one onto a concrete superstructure that was poured over the existing edifice.  The prefabricated apartments measure about 350 square feet and were manufactured in Idaho by Guerdon 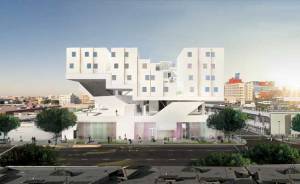 Enterprises. The units were trucked to Los Angeles.  Star will feature about 15,000square feet of community space, including offices for on-site social services.