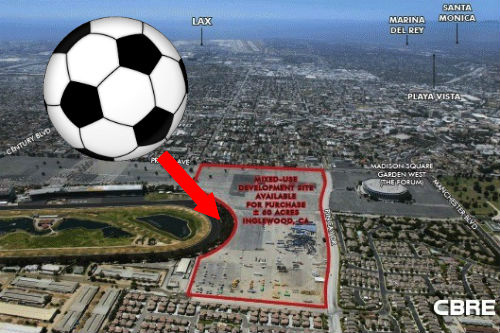 There was so much heated speculation about the 60-acre Inglewood site (now a parking lot) just between the recently redone Forum and the shuttered Hollywood Park complex (soon to be a ginormous mixed-user) when it was revealed that Rams owner Stan Kroenke was behind the purchase. Many hoped the purchase pointed toward Los Angeles finally getting an NFL team back in town. Now it seems that the land might indeed be seeing some football—the European kind. LA Business Journal says that tabloids in England have been reporting that Kroenke is interested in buying a license for a soccer team that will be called LA Gunners, bringing them to the States and having them play in a stadium on the parcel. The Gunners would be a “sister team” to the London team Arsenal, in which Kroenke is a major stakeholder. LA already has two soccer teams; do we really need a third? Really?