The Stadium slated for Hollwyood Park Casiono Development had eased by major hurdles like not having to produce an EIR (environmental impact report, which is usually long and strenuous process), they collected 20,000 signatures for the project 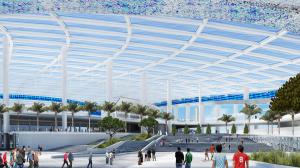 when they only needed 8,100 thus allowing City Council to just approve the project instead of putting it on the ballots to be voted upon by the residents of Inglewood well now it may go back on the ballots.  Well the Stadium seemed clear on its way to breaking ground but that would be way to easy and major developement in South LA/Inglewood don’t come easy, so of-course with everything looking way too peachy and smooth a monkey wrench had to be thrown into the process for the

Inglewood Stadium to move from paper to something actually tangible and here it is.  To get to the meat and potatoes of all basically the developer of the Stadium has so far refused to officially commit to hiring union workers to build and operate the stadium and the union has started collection signatures that could lead to a local vote.  Hopefully a decision that benefit both parties can be met, I really want to see a Stadium rise next the Forum.

Friction Between Unions and Developers in Inglewood