The Banc of California Stadium will host its first LA Football Club Game against Seattle Sounders April 29th at 6pm.   The recently completed $350 million, 22,000-seat, Gensler-designed stadium has been under construction since 2016. The site was previously occupied by the Los Angeles Memorial Sports Arena.   A ribbon-cutting ceremony held on April 18th marked the completion of the 20 months of construction.  LA Mayor Eric Garcetti, City Council President Herb Wesson, Councilmember and Coliseum Commission President Curren Price, MLS commissioner Don Garber, and Co-Owner Ervin “Magic” Johnson were just a few present for the ribbon cutting ceremony.  The new stadium is the newest landmark in Exposition Park, along with the LA Memorial Coliseum, the California African American Museum, the California Science Center, and the Natural History Museum of LA County and the under construction Lucas Museum of Narrative Art. 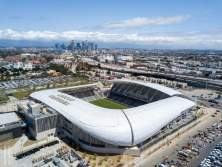 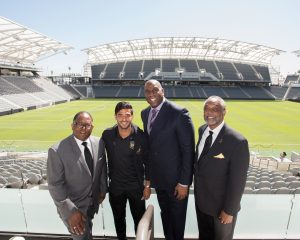 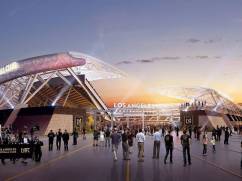 L to R; Peter Guber, Magic Johnson, councilman Curren Price, Jr., Will Ferrell and Tony Robbins at the groundbreaking of the new Banc of California stadium which will house the Los Angeles Football Club. Groundbreaking for the stadium, which will be built on the site of the Sports Arena, was held Tuesday. The project is scheduled for completion in 2018. (Photo by David Crane Southern California News Group)

Kicking Off A New Era Of Soccer In Expo Park

Join us for a Free Kids Skills and Safety Festival! Learn how to ride your bike safely, start and stop properly, avoid hazards, yielding, ride an obstacle course and more! We’ll even have a limited supply of bikes and helmets for those without.Fun for all ages.Skills stations.On-street group rides.
Certificates and goody bags.
Bike wash.
Helmet giveaways.
Food!

Helmets required for all riders.

Made possible by the USC Good Neighbors Campaign http://goodneighbors.usc.edu/, an employee-giving program that supports university-community partnerships.

Similar to what UCLA has with Westwood, USC is now building their very own village.  USC Village (formerly the Village at USC) is being called the largest mixed-use project in South LA history, combining retail, student housing, and academic space in more than two million square feet. One look at the latest renderings for the project confirms just how massive an undertaking it will be. The finished product will include pedestrian-friendly plazas around a central square and so many of those trademark USC bricks. It also looks remarkably open when compared to other parts of the campus.

The Village will replace the outdated University Village on the same site off Jefferson and across from the campus, and will eventually include a hotel, bars, and a grocery store. The USC Village is expected to bring a whopping 12,000 jobs, 8,000 of them permanent, to the area.